Michael Churchill joined the Law Center in 1976 and served as either managing partner or co-director of the Center until 2006. Mr. Churchill currently serves as Of Counsel. His practice primarily focuses on education work and Mr. Churchill has also litigated many landmark civil rights cases.

He represents 7 families, the NAACP of Pennsylvania and the Pennsylvania Association of Rural and Small Schools in our case challenging Pennsylvania state officials for failing to uphold the state constitutional mandate to provide a thorough and efficient system of public education. Mr. Churchill successfully advocated for a class of special education students from the Chester Upland School District to prevent closing of schools and to require the state to provide sufficient funding for special education programs.

Before starting at the Law Center Mr. Churchill worked for the Department of Housing and Urban Development and also practiced for 10 years at the law firm Ballard Spahr Andrews & Ingersoll. Mr. Churchill served as Acting General Counsel of the Philadelphia School District in 1984. He was a clerk for Chief Judge J. Edward Lumbard in the Second Circuit Court of Appeals. 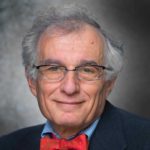